The committee of AIF is deeply saddened by the death of Maryam Mirzakhani, a prominent member of the mathematical community. For many months she struggled, with all the courage and persistence so characteristic of her, against a recurrence of cancer. But this time the challenge was too great even for someone as remarkable as Maryam was. Stanford mathematics Professor Maryam Mirzakhani was a member of the AIF Editorial Commiteee since 2012. Her honors include the 2009 Blumenthal Award for the Advancement of Research in Pure Mathematics, the 2013 Satter Prize of the American Mathematical Society and the 2014 Fields Medal. Mirzakhani was born in Tehran, Iran. She first gained international recognition during her high school years: in 1994 she earned a gold medal in the International Mathematical Olympiad and the following year, she again won another gold medal, this time achieving a perfect score. After graduating from college at Sharif University in Tehran, she headed to graduate school at Harvard University, where she worked under Curtis McMullen. At Harvard, Mirzakhani gained a reputation for her determination and her relentless questions. McMullen described Mirzakhani as filled with ”fearless ambition”. Her 2004 dissertation was a masterpiece in which she solved two longstanding problems. After her doctorate at Harvard, Mirzakhani accepted a position as assistant professor at Princeton University and as a research fellow at the Clay Mathematics Institute before joining the Stanford faculty in 2008. She was awarded the Fields medal in 2014 for her striking and highly original contributions to geometry and dynamical systems. Her work on Riemann surfaces and their moduli spaces bridges several mathematical disciplines – hyperbolic geometry, complex analysis, topology, and dynamics – and influences them all in return. Mirzakhani’s early work concerns the behavior of the number of simple closed geodesics on a hyperbolic surface. The classical prime number theorem for geodesics states that the number of closed geodesics whose length is less than some bound Ls asymptotic to $eL/L$ for large $L$. The behavior is very different in the case where one counts only the simple closed geodesics, namely those which do not intersect themselves: the number of simple geodesics of length at most $Ls$ asymptotic to $c.L6g−6$ for large $L$, for some constant c depending on the hyperbolic structure. Generalizing earlier work of McShane, Mirzakhani established a link between the volume calculations on the moduli space of curves and the counting problem for simple closed geodesics on a single surface. Her calculations of certain volumes of moduli space, not only yielded to a proof of the counting result for simple closed geodesics but also give another unexpected roof of a conjecture by Witten. Most recently, Mirzakhani, together with Alex Eskin made a major breakthrough in understanding another dynamical system on moduli space that is related to the behavior of geodesics in moduli space. They proved that although complex geodesics in moduli space are a priori transcendental objects defined in terms of analysis and differential geometry their closures are algebraic objects, as in the celebrated Ratner theorem for homogeneous spaces. Maryam had one of the great intellects of our time, and she was a wonderful, modest person. Her impact will live on for the thousands of women she inspired to pursue math and science. She will be tremendously missed. Mirzakhani is survived by her husband, Jan Vondr ́ak, and a daughter, Anahita.

The committee of AIF 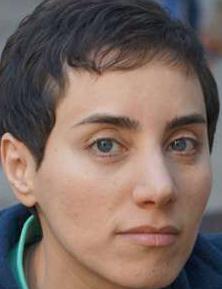